I mentioned that we are initiating a program for Juniors to assist in Jr development. It is called HOOPS HOOPS: Help Optimize Outstanding Potential

Balmy Beach Junior Rugby, Balmy Beach Rugby Alumni and the Balmy Beach Club are proud to announce a new program to help develop the potential of our junior players.

This program, named for the iconic hooped socks worn by the Balmy Beach First XV, will provide a year long athletic membership to the Balmy Beach Club to those select junior players who show a commitment to personal development and the game of rugby.

Open to U17 and U19 boys and girls, HOOPS will help your players realize their full potential; in the gym, on the pitch and in life.

Help us, Help you get your HOOPS.

Here are the Bios of our first two recipients Derek and Jordan Persaud from Neil McNeil High School.

My name is Derek Persaud. I am currently in grade 12 at Neil McNeil and am 18 years old. I play rugby for Balmy Beach and for my high school. Recently, my twin brother (Jordan) and I were selected to be members of the HOOPS program at The Balmy Beach Club, receiving free memberships to the club for the next year.

I started playing Rugby in grade 10 when I played 7s for my school Junior team where we won the TCDAA championships. The same year, we were finalists in TDCAA 15s. After having such a fun time playing rugby and developing a passion for the sport, my brother and I convinced our ever so skeptical parents to sign us up with Balmy Beach to play 15s in the summer of 2016. During the season, the team played very well but were eliminated in the semi-finals by Ajax. However, the following season at Balmy, we bounce back and won the championship.
In grade 11 at Neil we were able to win TDCAA Senior 7s in the fall. Unfortunately, I was unable to play in the 15s season in the spring of 2017 for Neil as I was out with a knee injury (hockey-related injury). The following high school season however was another bounce back, where we won TDCAA 7s finals and were again crowned champions. The upcoming school rugby season was one I looked forward to, hoping to cap off high school with a trip to OFSAA, but Neil does not have a Senior 15s team this year due to coach-related issues. On the positive side, the time off allows me to work out and get stronger at Balmy Beach Club as I prepare for the upcoming 15s season this summer with the U19 team.

My name is Jordan Persaud. Both my brother and I recently received free club memberships. Below is a list of my experiences with rugby (my brother, Derek, will send you his own story).

I was born March 8, 2000. I grew up in a loving household with all of my close family members–both parents and my twin brother. I began playing rugby in the spring of 2016, when I started playing 15s in grade 10 for Neil McNeil High School (where we were finalists, finishing second at TCDAAs). I was unable to play rugby prior to this season due to numerous injuries on separate occasions. Having developed a new passion for the sport after the school season, both my brother and I decided that, seeing that we had a few friends already involved with the league) we wanted to try playing U16 15s for Balmy Beach Club over the summer. With a little persuasion of our parents, they accepted and were supportive of our wish to do so.

In grade 11, I played 7s (for the first time) at Neil McNeil, and we went on to win the TDCAA championships. Later that school year, I played 15s again at Neil McNeil, but we lost in the finals, finishing second for a second time. I played Balmy Beach Club again in the summer of 2017, playing second row on the U18 15s team.

At the beginning of grade 12, I played 7s at school again, where we won the TDCAA championships a second time. Unfortunately, however, we do not have a senior rugby 15s team at Neil McNeil this year.

I have had a lot of fun playing rugby in my high school years and I look forward to playing with the Balmy Beach Club for the next couple of years, especially this upcoming U19 season!
Pics and more info on these twins!

The boys played hard and finished with Silver Medals. They beat Atlantic, Quebec & Wolfpack and lost to BC in a close 10-8 game. 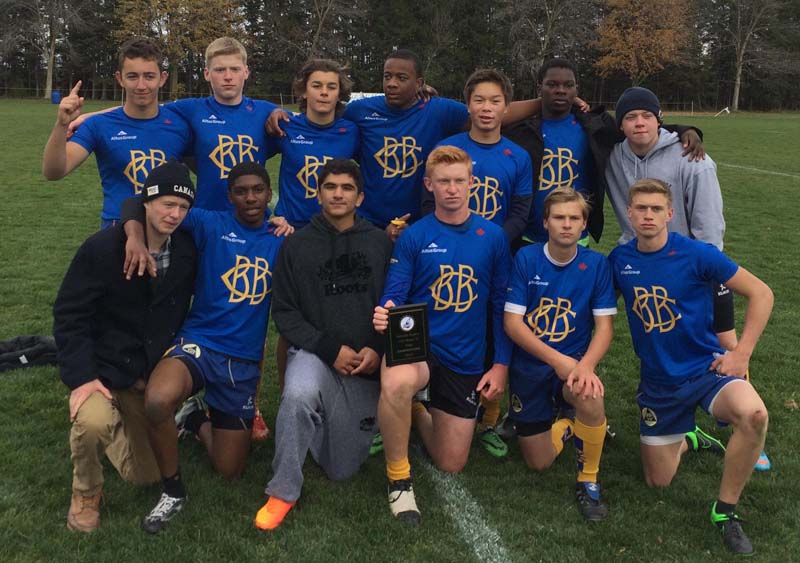 Nice win for the boys vs Oak Singers 32-14! Thanks again for all your support Jim and Gerrry and Beach Alumni! Great season.

U8/U10 players with Toga before game vs. USA

BBC Jr. Rugby is proud to be a TIRF Partner Club. Our association with this foundation allows us to offer subsidized registration to some communities. If you are U18/U16 player, prior to registering with BBC you should first see if your high-school qualifies you to be part of the TIRF program. A synopsis of the TIRF program and a link to a list of partner schools is below:

The Toronto Inner-City Rugby Foundation (TIRF) brings together schools, clubs and the rugby community to support student athletes from lower income and immigrant-rich neighborhoods to improve their athletic skills and to adopt the rugby ethos of hard work, discipline, and mutual respect. TIRF focuses the game in communities and through the commitment of clubs and high schools, trains young players to achieve success in and through rugby. TIRF works with Rugby Ontario and Rugby Canada to lower costs to players and assists with overcoming financial barriers.