The great news of the weekend is that both Beach Sr Men’s Teams won the McCormick Cup. The 2XV beat Lindsay to win the Gee Gage Cup and the 1XV won a nail-biter to beat the Scottish. That makes 16 McCormick Cups for the Blue and Gold. If you didn’t make a chance to see the game here is the link:

Beach II’s V Lindsey – Just as a little history on this match; Beach TRU I’s and Lindsay played in the same league this summer. In our one match up, Beach won a close fought game. Beach finished 2nd after the TRU season qualifying for the TRU cup game. However, the league passed a rule that Beach was, by this new league rule, not allowed to win the TRU cup. As a result 3rd place Lindsay was promoted to the cup game, and Beach was moved to the “Plate” bracket. Lindsay then went on to beat Brampton to win the TRU Cup. Beach then went on to beat Brampton winning the “plate”. So this game represented a massive opportunity for Beach ORU II’s (many of whom played on Beach TRU I’s this summer) to take it to the current holders of the TRU I Cup. A cup at the Beach was denied a chance to win, due to a league rule banning us from competing for it. And “bring it” we did.

As this game kicked off it became clear pretty quickly that Lindsey was in trouble. Led by Captain Malency Wainwright at inside center and directed from the front by 16 year old Stephen Webb, Beach marched down the field again and again seemingly unopposed. By the time the whistle blew for half time the score was 28-7. The deep Beach bench brought fresh legs into the fight with solid shifts put in by long time Beach stalwarts Brandon Connerty and Curtis Brown. By the time the final whistle blew the score was 52 – 26 for Beach and the boys in Blue and Gold once again hoisted the Gee Gage Cup.

Beach I’s V Toronto Scottish – Balmy Beach VS Toronto Scottish in a McCormick Cup Final. A tale as old as time. This was a game that promised to be a hard hitting battle and boy did it deliver. An early penalty led to the Scottish being able to kick their way into our 22. What followed was a 10-minute battle encompassing 3 different line out maul defenses and over 30 cumulative defensive phases. After realising that Beach would not break, the Scottish settled for three points. A line out shortly after left the Beach in prime scoring position and quickly led to a Beach try in the corner by team try leader Denzel Borrice. Score 5-3. This set the dynamic for the rest of the match with the theme of; every time the Beach maintains 5 phases we score, every time the Scottish have the ball they grind through a million forward balls off nine, and we have to gut up and defend over and over again for 10+ minutes at a time. This made it absolutely integral that the Beach defense hammered into the Scottish forwards in order to stop their momentum. Another Scottish line out 5 minutes later would see Beach steal the ball and put Beach into the Scottish 22 and then shortly after on the goal line. Beach tight head prop Julian Alexander would not be denied as he took a crashing ball off 9 to thunder over the try line. 12-3 for Beach. Another two tries, both following line outs led to a half time score of 17-15. The Scottish struck first in the second half as they rumbled into our 22 to score a try in the corner. Score 17-20 Scottish. By minute 60 the Toronto Scottish had worked their way into our 22, but Beach defense held firm after multiple phases. The Scottish eventually generated a “not rolling away” penalty and looked to kick for points. Score 17-23. Shortly after a Beach line out puts Beach into position to score. After going wide, the Forwards bring the ball back under the posts with loose head prop Pete Vandersteen picking and going to get over the line and dot down the ball. Team Captain Stephen Drwyer lined up the kick, which banged off the uprights. Thankfully the rugby Gods were smiling on Beach and the ball crossed over the posts after the bounce. Score 24-23 for Beach. The score remained the same leading into the dying minutes of the game. Well into injury time and with the Scottish banging on our door, Beach defense held up for over 25 consecutive phases when Aidan Abbott and Beach newcomer Kyle Lagasca double teamed the Scottish 13, holding him up to force a maul. The Scottish were unable to retrieve the ball from the resulting mass of bodies piling in, leading to a penalty against them. Game over. Beach wins its 16th McCormick cup tieing us with the Markham Irish for the most ever cups at 16. 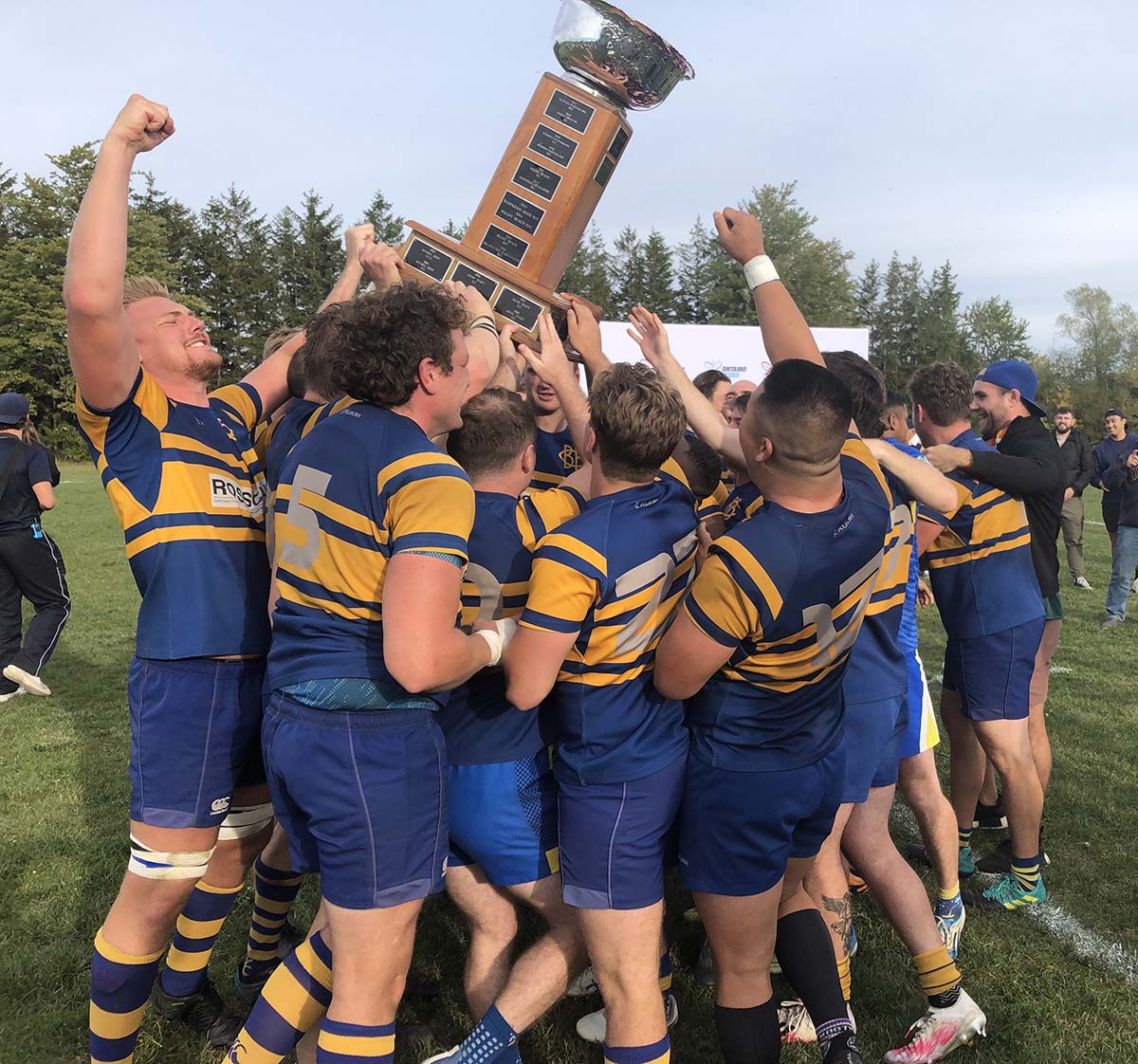 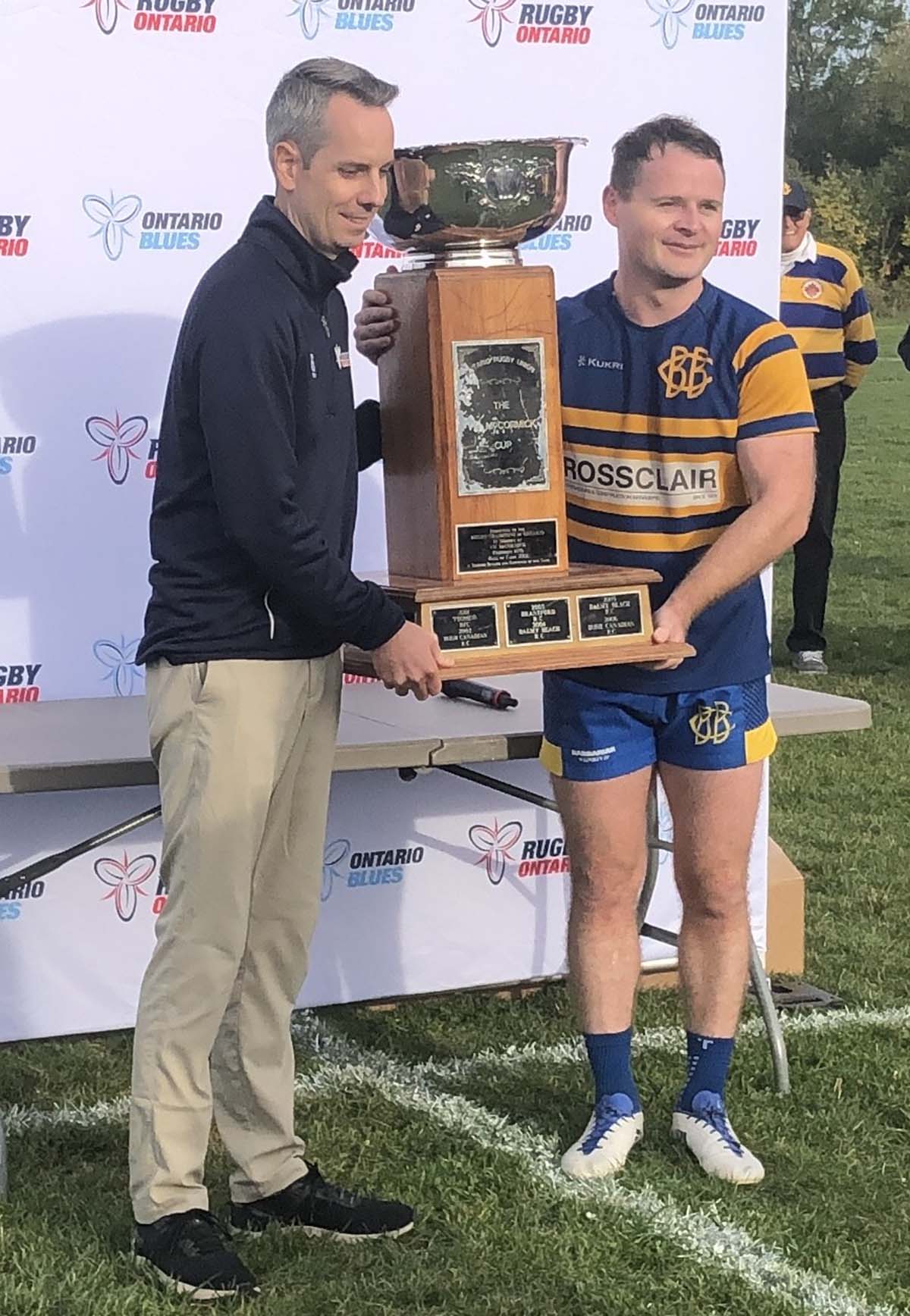