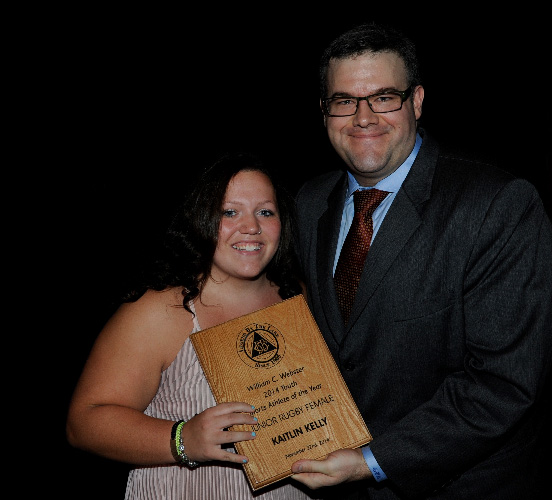 Kaitlin attended Sir Oliver Mowat for high school and is now attending Humber College where she is a student in the community and Justice Service’s program as her long term goal is to become a police officer.

I started playing rugby in high school in grade 9 and played for all 4 years I was there and I started playing for Balmy the summer of grade 9 and have been playing for 4 years now as well. My best rugby experience was when me and my high school team went to Japan in April of this year for a 7s worldwide tournament and got to represent Canada and meet so many new people and made so many new friends. I will be returning to play for the BBC women next year and I am so excited because they have been more then welcoming and I have already got the chance to play with them and they are awesome and apparently I have been recruited. I played lacrosse in high school along with rugby and I loved that
as well I was the goalie and even got to go to OFSAA. I have also been doing karate for 10 years and almost have my black belt. I have played pretty much every sport you can name since I was 4 and once I started playing rugby I knew it was the sport I would stick with because I love it. In high school I received the Rugby MVP in grade 10 and 11 and I was the captain of my high school team for grade 10, 11 and 12 as well as the Captain of the U18 team for The Beach this year.

Waleed attended Cedarbrae C.I and is now studying Kinesiology (B.Sc) at York University where he is also on the York rugby club. He has been playing with the BBC since grade 10, 2012.

My favorite memory of rugby would probably be this year when we had the division semi finals. That was my best performance as I scored a try running through three or four players into the try zone. I made big hits that game. As well as breaking through the defensive line a few times. It happened a day after my days of fasting was over so I was still in the habit of not eating till sunset. So I believe that was a big accomplishment for me. We won 31-3 that game too heading towards the finals. I received 3 MVP forward awards from my high school. I won the male athlete of the year award in gr.10 for my school. This year I won the players player award for the BBC U18 club this year. Other than rugby, I can play soccer, basketball, Volleyball, and a little football. I will be joining the Men’s league next year playing for BBC trying to get a spot at the academy squad. My coaches in high school, the beach club, and even my teammates call me a quiet leader. I’m not the one always talking during team huddles but on the field I’m always the first one to hit the rucks and always the first one to go for the hits on the big forwards. I guess they call me a superstar in high school.